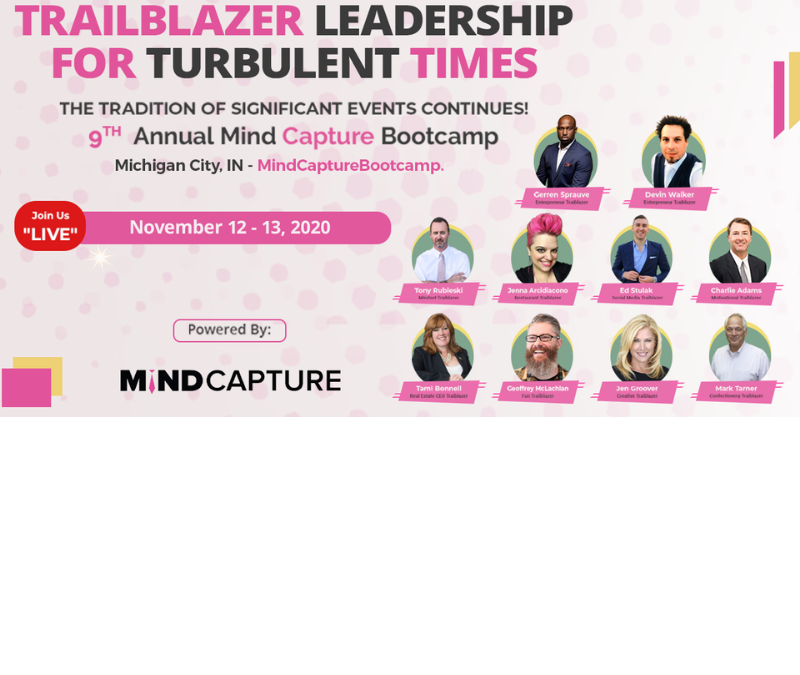 We are only a few weeks away from one a rare, public, LIVE leadership event in the Midwest—and we’re pumped. To help YOU get a little more excited, we want to officially introduce you to this year’s all-star lineup. We’ve grabbed some of the top business men and women in their areas from around the country. Yes, country. This event is a big deal… You don’t want to miss out. The event will be held on November 12 and 13 in Michigan City, IN at the Blue Chip Casino.

Tami Bonnell
Tami Bonnell is an internationally renowned speaker and 30-plus-year veteran in the real estate industry. She is an information junkie and is passionate about investing in people. Bonnell is an active member of the National Women’s Council of REALTORS®, NAWRB’s Diversity & Inclusion Leadership Council and was honored by STEMconnector® as one of its 100 Corporate Women Leaders in STEM. Instrumental in building three major brands, Bonnell joined EXIT Realty Corp. International in 1999 and was appointed CEO in 2012. In 2019, she was recognized as one of the 200 most powerful and influential people in residential real estate and among the top 10 women leaders.

Tony Rubleski
Tony Rubleski is the president of Mind Capture Group and the event’s promotor, creator, and host. This is his 9th year hosting the annual Mind Capture Bootcamp. He is an in-demand speaker who has given hundreds of presentations as a strategic business coach with a message designed to help people “capture” more minds and profits. He has over 25 years of experience in the personal development industry whose work has been featured in various media outlets ranging from Toastmasters magazine, The Detroit Free Press, the FOX TV network, ABC, to CNN Radio, NPR, and Entrepreneur Radio. Rubleski’s Mind Capture book series has produced multiple bestsellers in a variety of business and coaching categories with Amazon.com. Book number seven in the series titled, Positive Disruption: A Quote & A Question to Upshift Your Life, releases globally in December 2020.

Jenna Arcidiacono
Jenna Arcidiacono’s first job at 14 was slinging chili dogs and crafting root beer floats in Kentwood, MI. From there she spent time in a variety of different restaurants’ kitchens before receiving her Bachelor of Fine Arts from Michigan State University. She moved to San Francisco and landed a job that educated her in true Italian cuisine. Her next job introduced her to her husband, Maurizio, who took Arcidiacono on her first trip to Italy, where she fell in love with the food and relaxed culture (and of course with Maurizio). Soon after, Jenna and Maurizio were married, and they lived in northern Italy for three years. After having two daughters and working in corporations, Arcidiacono finally went for her dream and opened Amore Trattoria Italiana in July 2010. It garnered awards quickly, including Best New Restaurant 2011, Grand Rapids Magazine; Restaurant of the Year 2012, Grand Rapids American Culinary Federation; Best European 2012, Grand Rapids Magazine; and Chef of the Year 2013, The Grand Rapids Press.

Charlie Adams
Charlie Adams is an expert in the greatest sports moment in American history: The Miracle on Ice. During the 1980 Winter Olympics in Lake Placid, NY, the USA hockey team stunned the mighty Soviet Union hockey team and went on to win the gold medal. Through extensive research, Adams has dedicated himself to developing not just a motivational talk, but a powerful experience on all of the incredible lessons we can take from the legendary Miracle on Ice on 1980. Adams is the creator of the “Stoke the Fire Within” keynote and has delivered over 3000 peak performance presentations since 1980. Adams is also an award-winning broadcast journalist as a sports anchor, who left TV in 2005 to devote himself fully to building inspirational programs focused around inspirational people and places. Adams now hosts a morning inspirational radio show and speaks on Lake Placid and the Miracle on Ice.

Ed Stulak
Ed Stulak is the founder of IGRE Coaching, a New Jersey licensed realtor, and an Instagram star in the real estate world reaching over 50,000 viewers worldwide and growing. Since being licensed, Stulak and his team at The Vendrell Real Estate Group have sold and closed over $45 million worth of real estate. Stulak has shared the stage with names like Ryan Serhant, James Harris, Ricky Carruth, Brad Lea, and several other business leaders. Named the “Top Digital Industry Hustler to Watch” by Realtor magazine, Stulak trains real estate agents globally on how to scale a personal brand and an online presence that matters.

You can learn more about Stulak here.

Jen Groover
Jen Groover is a powerhouse who has been a successful serial entrepreneur, performance coach and is a retired National Level Fitness Competitor. She has been a highly sought-after speaker and trainer for over 20 years and has been honored with so many titles that we can’t even list them all here. A few include SUCCESS magazine’s honor as a “One-Woman Brand,” as well as a “Creativity and Innovation Guru” and a leading “Serial Entrepreneur” by Entrepreneur magazine in addition to being ranked #8 by SAP in the Top 51 Influencers of Human Potential. Groover has been a top business and lifestyle contributor and content creator for many major networks and magazines: ABC, CBS, CNBC, NBC, MSNBC, Fox News, Fox Business News, The CW, The Huffington Post, Entrepreneur Magazine, Inc Magazine, The Wall Street Journal, and Positively Positive. She is currently launching her latest book, The MORE Method: The Simple Formula to Get More of Everything You Desire in Life, which is a culmination of her unique interdisciplinary teachings of human potential, spanning over two decades.

Mark Tarner
Mark Tarner is a real-life Willy Wonka. He has been the president of the South Bend Chocolate Company since 1993 and has been active on a variety of committees, including Travel & Industry Council for the Chamber of Commerce, the Board of Directors for The Chamber of Commerce, and the Board Member of South Bend Alumni Association, amongst many others. He was also the president of the South Bend Alumni Association for several years. Tarner is a native Hoosier who is extremely active in his community—in personal and professional life. Fun fact about Tarner: He’s also an amateur paleontologist.

Gerren Sprauve
For over 12 years Gerren Sprauve has been a noteworthy leader to those he’s come in contact with. He’s an entrepreneur, author, and speaker. You may know him from his story of having quit his corporate job at a national insurance company to become a janitor in order to better understand the experiences of people in the service industry. Since making such a radical change in his professional career, Sprauve has built a commercial cleaning company that seeks to help his staff reach their goals while serving commercial facilities throughout Florida. Sprauve is a teacher at heart and prides himself on being a respected mentor to thousands of high school and college students. He can also be credited with helping support several startup companies in the U.S. mainland and in the Caribbean in a variety of ways.

Geoff McLachlan
Geoff McLachlan is a professional speaker, coach and trainer who has made over 1000 speeches to almost one million individuals across North America. As a coach, he believes deeply in the impact of powerful conversations. McLachlan is also the founder of Professionals at Play, a training organization that specializes in growing highly productive teams through the power of play. His passion is to help people win!

Devin Walker
Devin Walker is a rare breed of insight leader; he’s not just an innovator, he is also adept at having his finger on the pulse of what’s happening now, as well as where things are going. Residing at the intersection of entertainment, entrepreneurship, and innovation in Las Vegas, Walker helps entrepreneurs envision how to execute a new mindset and create something that consumers will crave. With a background as both an entrepreneur and an artist, Walker is a highly entertaining speaker who combines expertise and insight with entertainment. In 2016, Walker released his first book, Gangstaprenuer, which took an unexpected look at the parallels between traditional entrepreneurial skills and practices employed by history’s most successful criminal business leaders. As a former Air Force Officer and Music Industry Executive, Walker has also been a lifelong entrepreneur in the truest sense.

*Please know that we will be following all of Indiana’s COVID-19 protocols in order to keep this in-person event as safe as possible.

Now—are you excited or what!? Tp get 1/2 off (2-tickets max) use the special code: VIP20 Sign up now for the 2020 Mind Capture Bootcamp, because it’s going to be an event you don’t want to miss.