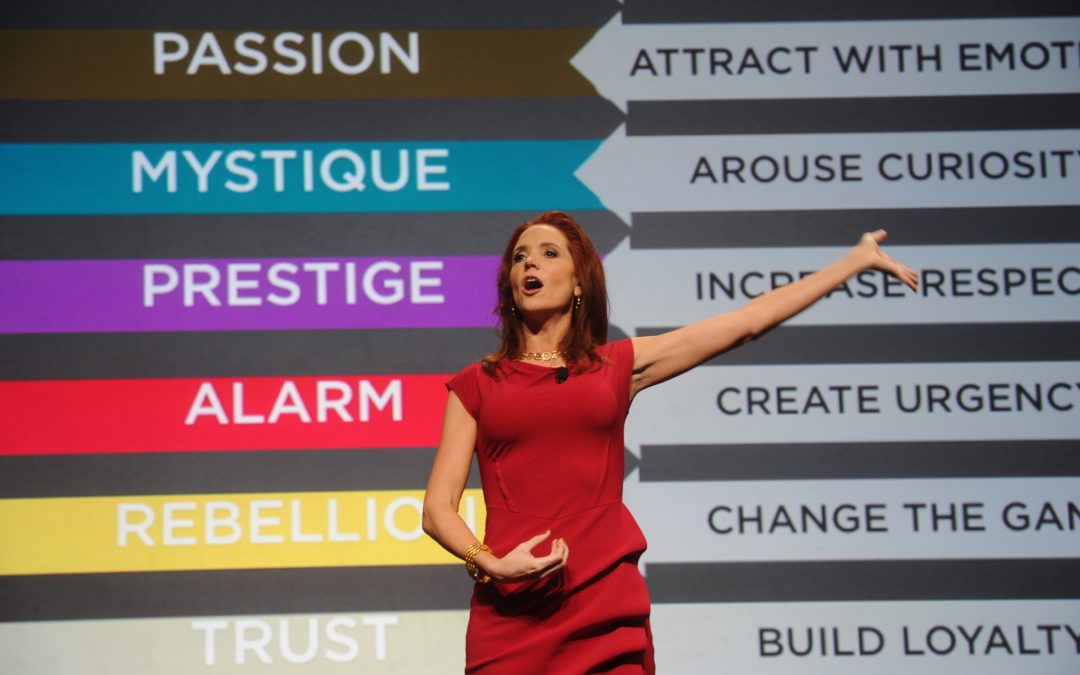 “One of the things that we learned is that products that are fascinating can charge a lot more money because people have a relationship (with them) and they are so captivated by them. They’re willing to pay more money.” -Sally Hogshead

Sally Hogshead has been called the Queen of Fascination. When I sat down to interview her and discuss her book Fascinate: Your 7 Triggers to Persuasion and Captivation, little did I know that our interview would be one of the most memorable I’ve ever conducted. Not only is Sally wickedly smart, but she’s also down to earth. I found that our interview time flew by. It seemed like we were old pals who’d known each other for years.

In her book Fascinate, she revealed a wide variety of insights into such areas as why the Salem witch trials began with the same fixations as those in Sex and the City, how a 1636 frenzy over Dutch tulip bulbs perfectly mirrored the 2006 real estate bubble, and why the billion dollar “Just Say No” program actually increased drug use among teens by activating the same “forbidden fruit” syndrome as a Victoria’s Secret catalog. If these topics don’t capture your imagination, not much else will.

Since we first spoke, Sally has gone on to even greater heights of success and hit The New York Times bestseller list in the summer of 2014 with her book How the World Sees You. She is not only a great marketer, but her extensive research and passion in the areas of persuasion and marketing have placed her in very rare company as one of the world’s top experts on the subjects.

The three main things I enjoyed most about my interview with Sally include:

1. She did her homework on the topic and had the data to back up many of her points. In addition, her resume of working with many of the biggest brands in the world gives her a unique and valuable perspective on the mind of consumer behavior.

2. Sally talked about beverages and how something as nasty and potent as the drink Jägermeister can not only still exist but actually thrive. It’s a great case study about the fact that even the strangest of products can make it with good marketing and a unique audience.

3. Sally shared the lesson about vanilla ice cream and why it’s still so popular in a world and industry loaded with tons of options and competition.
Key

Two Notable Quotes from Sally During Our Interview:

“The first gold hallmark of a fascinating product, brand, or person— in other words the number-one most important way that we can distinguish if something is fascinating—is that it provokes a strong and immediate emotional reaction. It doesn’t try to be lukewarm. It doesn’t try to blend in. It instantly evokes some sort of responsiveness.”

In 2006 Sally began her research on the topic of fascination, including a groundbreaking national study by a global market research firm. Her research uncovered that the average attention span is now only 9 seconds, and that the brain is hardwired to focus on 7 specific types of messages. Her clients have included Intel, Cisco, Million Dollar Round Table, GE, New York Life, YPO, Inc. Magazine, and Intuit.

Sally has published several books and the interview is from her second book, FASCINATE, was published around the globe, earning Sally a frequent spotlight in major media including Today Show and the New York Times. Sally’s latest book, How the World Sees You, released in 2014 and made the coveted New York Times bestseller list. In it, she explores the science of fascination, based on Hogshead’s decade of research with hundreds of thousands of participants, including Fortune 500 teams, hundreds of small businesses, and over a thousand C-level executives.