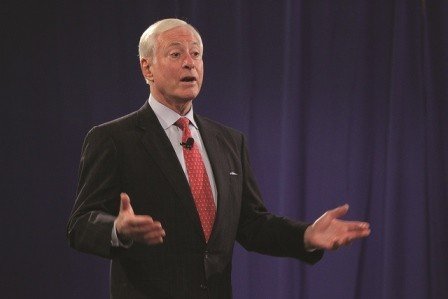 “I came across statistics that the total amount of knowledge enjoyed by human beings on earth will be doubling every seventy-two hours by the year 2020.” -Brian Tracy

It’s amazing to me that sometimes when we try too hard to make things happen, the effort and time are for naught, and we initially feel like we’re fighting a losing battle. On the other hand, sometimes when we seek to make something happen, it simply might take a few hours or days to occur, and often when we least expect it. When the second scenario occurs, it often feels way too easy! I believe that when it comes to making things happen, it often boils down to two major things: timing and intentions.

For example, when I received an email, out of the blue, from Brian Tracy’s publicist regarding his new book and that he was conducting interviews, I experienced what I described above.

A little time warp: Late last year, I approached Brian’s team about a possible interview for one of his other books. After filling out an extensive media questionnaire, I received back a kind and polite “no” to my request. I was baffled, to say the least. Being under deadline, I refocused my efforts on another possible guest from my list and continued on. When the email from his publicist showed up, I grinned and immediately thought, perfect timing!

When we look at my earlier request to interview Brian, I now believe that my intention was very different from Brian’s, thus the original “no” to my interview request. I was looking to interview Brian, but not only was the timing not yet right, but my intention to discuss one of his older books wasn’t a fit. When Brian’s publicist realized he needed to promote his new book (as a fellow author, I do the same thing) our intentions found alignment and harmony.

I was honored to secure the legendary Brian Tracy for a special interview to discuss his latest book, Earn What You’re Really Worth, and other success-related topics. It wasn’t easy, but it was definitely worth it as you’re about to discover!

The three main things I enjoyed most about my interview with Brian include:

1. Brian has a relentless drive to keep improving and learning. It would be easy for someone with his massive success to coast after a certain period of time. This is definitely not the case with him.

2. Brian has a positive belief in the free-enterprise system. It’s easy to pick on the US these days, and Brian definitely is a defender of the opportunities provided to citizens who live and do business here. It’s amazing how many immigrants come to the US and end up leading successful lives under the flag of freedom, which protects and rewards their hard work and hustle.

3. He described in vivid detail the steps needed to help a person achieve a goal. I consider Brian to be one of the top teachers and writers in the business space, and to hear him break the formula down was not only a cool experience, but also an honor for a serious fan of personal development like myself.

Two Notable Quotes from Brian During Our Interview:

Brian Tracy was born in eastern Canada in 1944 and grew up in California. After dropping out of high school, he traveled and worked his way around the world’s premier success experts and best-selling author of more than 50 books. His extensive personal studies in business, sales, management, marketing, and economics enabled him to move up to become the head of a $265 million company before he turned his attention to consulting, training, and personal development.